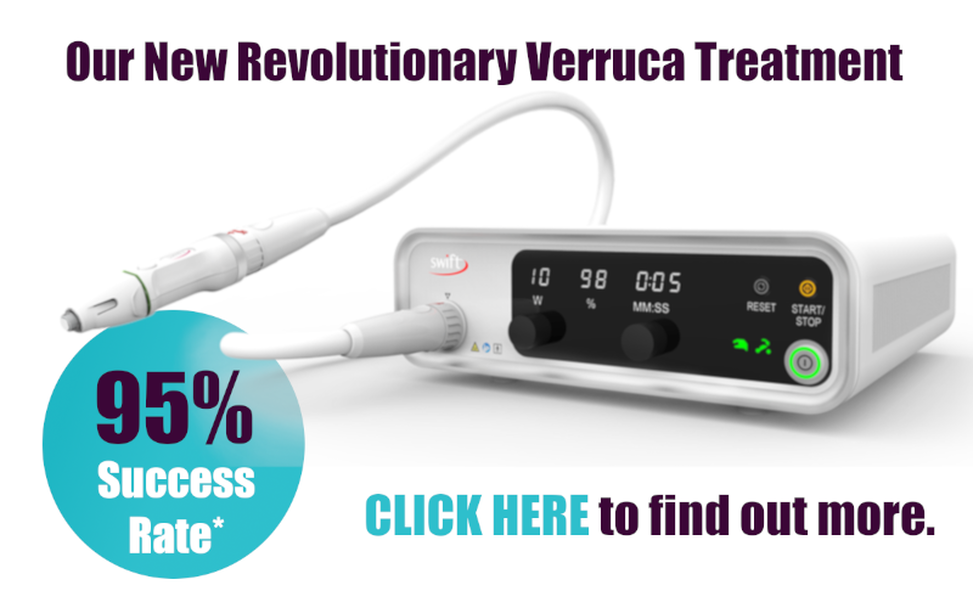 What our clients say about Crumlin Podiatry?

My son was referred to Owen for the Swift treatment after years of trying various unsuccessful treatments to remove extensive verrucas on both feet. We were very pleased that after one treatment his verrucas started to disappear! After only two review appointments his verrucas were gone! Thank you!
After 9 years of trying over the counter treatments and going every 2 weeks for cryotherapy I decided to try the Swift treatment. Owen was fantastic, made me feel very relaxed and after a couple of sessions I was verruca free. Thank you Owen and I finally got that long deserved foot massage I was dying for, was worth every penny! - Joanne
I attended 3/4 sessions with Owen to have verrucas removed from my foot. I had had them for well over 20 years and had treated them with a variety of over the counter treatments and old wife’s tales but but without success. After two sessions, with a certain degree of short term pain during the appointment, they were successfully dispatched. I was able to walk in and out of the sessions easily and there were no after-affects. I would highly recommend this treatment and it was carried out in a very professional and friendly manner. Thank you once again. - Richard McVeigh
I would highly recommend the swift treatment for verruca removal, it’s a fast painless procedure that gets the job done. Owen and his team provide a great local service. - Shane Murphy
Have been attending for the treatment of verrucas using the swift treatment. Having had them for a few years nothing worked until I tried this treatment. It was super and I wouldn’t hesitate to recommend it to anyone! - Andrea
I’ve been attending Crumlin podiatry for the past year receiving the swift treatment and I could not recommend it more.
I was a bit sceptical at the start as for years I had wasted time and money on over the counter treatments with no result, but Owen kept his word and I’m now verruca free! The treatment itself was over a longer period of time as my verrucas were stubborn as I’d had them years so I’d definitely say start it sooner rather than later! As for pain during the treatment, it was uncomfortable but manageable, there’s an option for anesthetic if you feel you need it but regardless it was definitely worth it. Couldn’t be happier with my results I can finally feel more confident with my feet! Thanks Owen!  - Clodagh
Owen and the team at Crumlin Podiatry were fantastic from the start. Owen was friendly, welcoming and really informative on what he was seeing and how that would effect me. Would highly recommend this service to anyone! - Lianne Cassidy
My son sustained an injury as a result of playing football. I took him to Crumlin Podiatry and we received prompt, professional and friendly service. - Ciara Campbell
I have been attending Owen for a number of years and he has worked very hard to keep my feet healthy and work with my constant problem of ingrown toenails. Despite for the last few years try to get me to have surgery to stop this happening I finally agreed to the surgery two weeks ago. The injections to numb the toes were, as he said, painful but I didn’t feel the surgery. Had a review appointment today and the toes are healing well. I have had no pain since the surgery and hopefully will be fully recovered in the next couple of weeks. Good time of year to have the surgery as I can wear open toe sandals. Would thoroughly recommend Owen and his colleagues, a brilliant team. - Yvonne Stewart
Having been an avid swimmer and gym goer for most of my life I've suffered with verrucas on and off since I was younger. These often cleared but I have been suffering for the past 4/5 years with them only getting worse.

Having spent a fortune on over the counter treatments and acid treatment at another podiatrist I was having no luck and they were only getting worse. I was also so embarrassed about them and self conscious which also put me off seeking alternative treatment.

'After years of wrongly cutting my own toe nails and dodgy overpriced pedicures, I've finally found somewhere to rectify the problems and its right on my door step. 100% recommend this place. Pain free experience and very reasonably priced. Have already made my next appointment. ' - Paddy-Ann Doran White
Fantastic! Owen was really fantastic. Put me at ease immediately and the end result after was better than I could have imagined. Silky smooth feet in 30 mins? Yes please! Have already booked next appointment. - Nikki O'Hare
See more...